Apple has officially unveiled iOS 15, and like many recent rumours and leaks suggested, several far-reaching improvements have come to iMessage and FaceTime. There’s also new system-wide emphasis on sharing and communication, as well as even more privacy-related features, and new ways to leverage on-device intelligence. iOS 15 will roll out to iPhone 6s and later devices in fall this year. Developer previews begin immediately, and a public beta will arrive next month. One feature that wasn’t mentioned in the WWDC 2021 opening keynote presentation, but appeared in a background slide, was Hindi language support for the iOS Quickpath swipe keyboard.

Starting with FaceTime, global lockdowns and quarantine measures over the past year have thrown light on challenges people face while keeping in touch. Apple says it has made this easier and more spontaneous.To make FaceTime calls feel more comfortable and natural, users can now leverage spatial audio. This is said to make people sound like they’re sitting in the same room and speaking face to face. Voices will be spread out in group chats to sound as though they’re coming from speakers’ positions on screen.

Voice isolation uses on-device machine learning to block out ambient noise and prioritise voices. On the other hand, if you want every bit of sound to come through, you can switch to a Wide Spectrum mode. In group FaceTime calls, users will be able to see every face in a grid view. Same-sized tiles will make it easy to identify who’s speaking while seeing everyone else’s reactions. Portrait mode blurs your background and puts the focus on you.

FaceTime users can now generate links to invite others. These links can be shared anywhere and even used by Android and PC users in a browser, with end-to-end encryption for privacy. You can plan ahead for calls, and send invitation links in messages or emails, or even create a shared calendar event. Screen sharing will let participants share information in any app for group research or even showing off your gaming skills.

A new experience sharing feature called SharePlay let you synchronise watching videos or listening to music with everyone in  a FaceTime call. Users can just press play in Apple Music, Apple TV, or any third party app that implements this feature. media will immediately be shared, and participants can all control playback or queue up a shared playlist. With picture-in-picture functionality, you can see friends’ reactions and even carry out text conversations as media plays. Media can even be played on an Apple TV while you continue your FaceTime chats on your iPhone. Third-party apps that are already working to implement SharePlay include Disney+, Hulu, HBOMax, TikTok, Masterclass, NBA, and Paramount+. 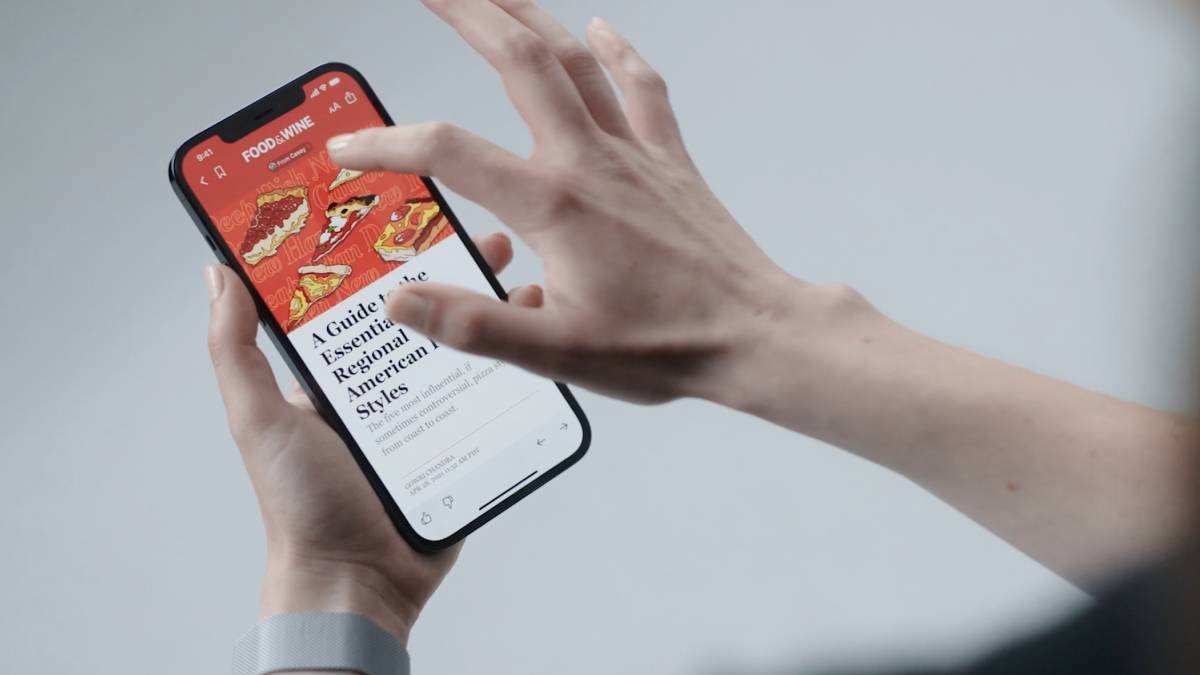 iMessage in iOS 15 will let users quickly find articles, photos, and more that are shared in chats and group chats. There are new collage and stack designs for photos, letting users swipe through them, tap to see full screen, and react. Shared With You sections will appear in Apple News, Apple Music, Photos, Safari, Podcasts, and other apps to conveniently surface links or media sent by friends.

You can tap their name at the top of the screen to pick up the conversation while checking that media later. Apple Music will let you save a shared playlist, while Photos will show shared media in the featured photos section and memories. Shared photos can be automatically brought over to the library, while filtering for screenshots and memes that you don’t want to save. Shared media can be pinned for easier retrieval, and will also surface in systemwide search.

Notifications get a fresh new look with contact photos for people and larger icons for apps to make them easier to identify. A new Notification Summary can be customised and scheduled to appear at any time you choose, letting you deal with unimportant notifications all in one go. Users won’t miss messages from people as this is intended for apps that send periodic updates.

The systemwide DND mode can now be used to show an away status in the Messages app. Users sending an iMessage will see that you won’t immediately be notified, but will be able to override to get through if they need to urgently.

You can also define periods in the day when you want to be totally focused on work, and enable one of several Focus modes. This is a new way to match your device to your current mindset  iOS 15 can use on-device intelligence to analyse past activity and suggest which notifications you need to be aware of. Each Focus mode can be associated with a dedicated home screen page that shows only relevant widgets and app icons to reduce distraction. Context like location and time of day can be used to suggest when to trigger a Focus mode, such as one for work, and custom ones can be defined. When set on one Apple device, it will apply to all others you want as well. 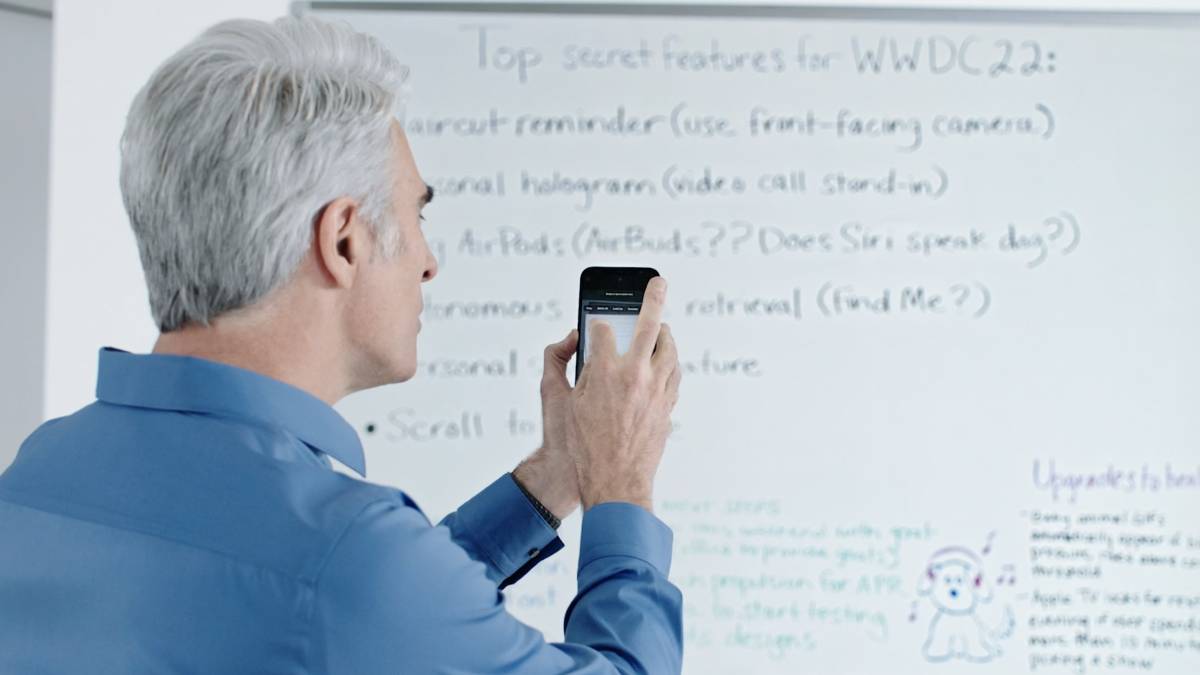 On-device intelligence will allow for Live Text to be detected and extracted from photos. You can capture information on a whiteboard, or even handwritten notes. Useful information such as names and phone numbers on shop signs, or instructions in recipes can just be selected and copied to another app, or sent to search or translate. Photos already in your library will also be scanned automatically. Live Text will understands seven languages including Chinese when it rolls out with iOS 15. On-device intelligence can also recognise objects and scenes such as the breed of a dog, type of flower, famous works of art, books, pets, landmarks.

Photo Memories can curate captured moments into heartfelt movies. Users will be able to set their memories to their own music from Apple Music. Relevant personalised songs are suggested and users can choose their own as well. Memories videos are created on the fly, and are interactive as well as editable. Transitions, filters, and pacing will be coordinated with the mood of the selected background track, and you can keep trying different variations. Consistent colour and contrast corrections will be applied to photos in a Memory video, to make them look like a professional colourist has worked on them.

Photos as well as text in photos are now searchable through Spotlight in iOS 15. Photos can be referenced by people, scenes, location, or elements. You can use it to find a photo of a specific receipt, handwritten note, recipe, or screenshot. There are also new rich results for contacts in search, showing call, text, FaceTime, and email shortcuts, their location if shared through Find My, tagged calendar events, notes, and files. There are also new rich results for actors, musicians, tv shows, and movies. 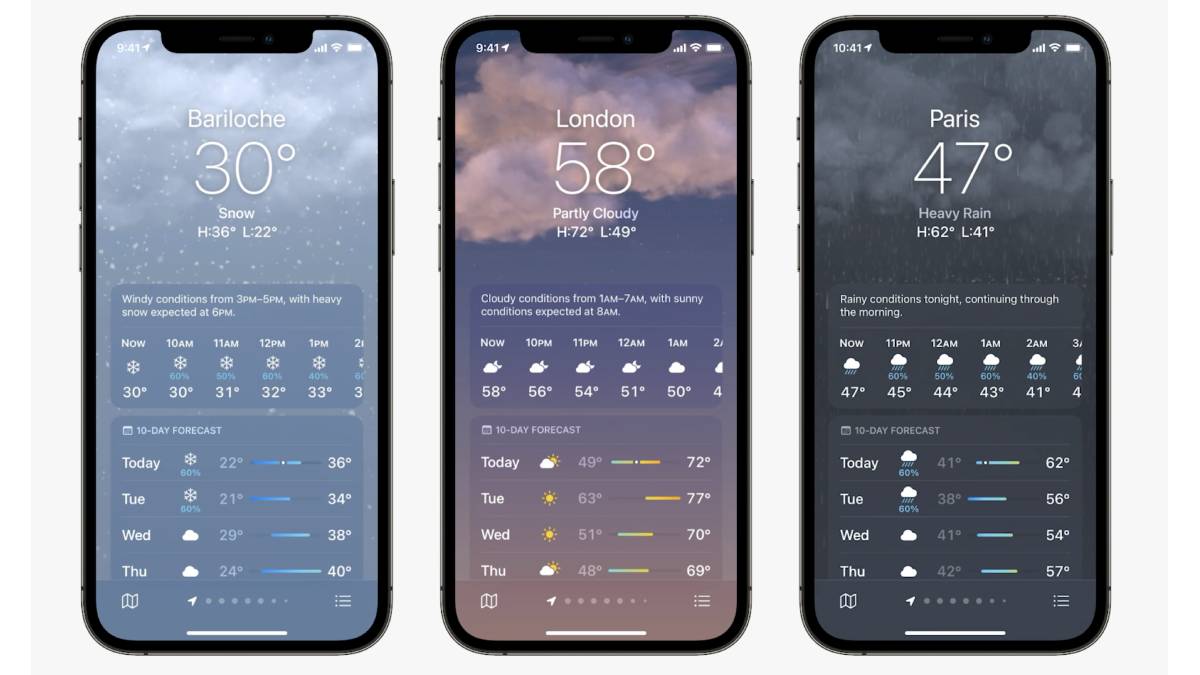 Apple Wallet will support Ultra Wideband position-aware location to let users unlock and drive their car without taking their iPhone out of a bag or pocket. You’ll also soon be able to unlock your house, and tap to enter hotels or offices, with a range of partners for locks and access systems already on board. Later this year, over 1,000 Hyatt hotels worldwide will support zero-contact access, which can be activated before you even arrive. Also later this year in the US, Apple Wallet will be able to store government IDs and drivers’ licenses in participating states. The US TSA is also working to enable airport security checkpoints with digital ID. Users will see the specific information requested, and will have to tap to present this to the authority.

Apple Maps is getting an interactive globe that invites users to tap and explore. A few major global cities including London, Los Angeles, and New York City are getting much more detailed maps for commercial districts, marinas, and important buildings. There’s now added elevation representation, road colours ,and hundreds of custom-designed landmarks. A new nighttime mode will show areas with a moonlit glow. More granular road details will help drivers better see and understand turn lanes, medians, crosswalks, etc. Maps will also render complex interchanges and intersections in 3D. Transit directions will help people find nearby stations and notify users when it’s time to step off a train or bus. Maps can even help you with AR positioning and directions.

The Weather app is getting an update with new data and layouts that change based on conditions such as rain, or air quality, with thousands of variations in the graphics. New graphics will help users understand wind, UV, and barometric pressure data. Full-screen high-res weather maps will show temperatures, precipitation, and air quality.

In additon, iPadOS 15 gets a few other improvements that take advantage of its big screen. Widgets can now be placed among app icons on all home screens. There are new widgets for Find My and Contacts, plus a larger format for Game Centre, Apple TV, Photos, Files, and others. App Library comes to the iPad with a quick access button in the dock, and you can reorder or hide home screens you don’t need.

Multitasking will be easier to discover and use. A new control appears at top of apps to easily trigger a split screen or slide-over view. Windows can be minimised to a new area called the Shelf making it easy to see and manage multiple open windows for an app. Appears when switching apps. Many open, even in split view with other apps. The app switcher can now be used to create split views by dragging one app over another.

Notes in iPadOS 15 will let users tag other people with @ mentions and see what’s changed in shared notes with a new activity view. Hashtags can be used anywhere, and referenced to help quickly find notes. Systemwide Quick Notes can be created by swiping in from a corner of the iPad screen, and can capture information from an app that’s in use such as a Safari URL. Quick Notes will be saved tro the Notes app and can be created on iPads or Macs, but can also seen on iPhones.

iPadOS 15 now also gets a Translate app that lets people practise handwriting with Apple Pencil and work in Split View. Auto translate detects when you’re speaking and in which language. Systemwide translation can work on text from anywhere, even in photos. You can download languages to use all features on-device.

Swift Playgrounds will now let users actually build iOS apps right on an iPad. You can run them fullscreen to try them out, and submit them directly to the App Store.

mydroneworld.tech participates in the Amazon Associates Program, an affiliate advertising program designed to provide a means for sites to earn commissions by linking to Amazon. This means that whenever you buy a product on Amazon from a link on here, we get a small percentage of its price.